“It was the way he was smiling that bothered me”…….BSC # 99: Stacey’s Broken Heart

This is the last BSC book I read as a kid, so it’s kind of a sad-ish memory for me.  Which is weird, because at the time I wasn’t upset about giving them up.  I just remember reading the excerpt from the next book, where Kristy suggests they disband the club, and deciding I didn’t want to read it.  I was way too old to be reading them at that point anyway.

But for this book itself, I remember a scene where some girl they go to school with called Stacey at Claudia’s house (during a club meeting) to tell her she saw Robert with another girl.  I thought it was unrealistic/dumb that someone would know to call Stacey there at the right time.  I was also not happy with the fact that Andi was the girl Robert cheated with, because I really liked her in earlier books, and wanted her and Stacey to stay friendly, even though Andi’s other friends were bitches.

It's the end of summer and Stacey’s enjoying hanging out with Robert.  They run into Andi Gentile, a girl Stacey used to be friends with.  But Stacey doesn't like hanging out with Robert's “popular” friends so they leave. The next day, Stacey tries to call Robert but his sister tells her she went to play basketball with the guys.  She goes to watch, because Claudia’s working on an art project, and Stacey apparently can't spend an afternoon alone.  The problem is Robert’s not there and his friends haven’t heard from him.  Robert later explains he was playing with a different guy, at a different place.  Stacey sort of believes him.....then Emily Bernstein calls and tells her she saw Robert at the mall with another girl.  Stacey ends up following Robert to the mall to see if he's meeting another girl, but he's only there with Pete Black.  She's still a little worried about the whole thing.

Meanwhile, Stacey gets an offer to take a week long baby-sitting job in NYC, for the Walkers, a family that she used to sit for. She's worried about leaving Robert, but excited to go to the city, so she takes it.  She of course loves being in the city and loves the kids she sitting for, so she has a great time.  She also hangs out some with this guy Ethan, who’s working for the couple she's sitting for (they’re setting up an art show).   About mid-week, Claudia calls her to say she saw Robert kissing Andi.  Stacey's heartbroken of course, and doesn't know what to do, but gradually starts to feel better.  When she gets home, Andi’s waiting to tell her she and Robert just kept running into each other and ended up hooking up. Then Robert comes over and they break up officially.

The subplot’s focused on Abby filling in for Kristy as BSC President, while Kristy's in Hawaii.  Abby decides to not care if people are late to meetings, to only collect dues every other week, and has all sorts of wild ideas.  She also wants to prove she can't handle the job, so she organizes a Mexican Festival to have for the kids they sit for.  It ends up almost being a disaster, because Abby's not so great at the planning phase, and I think it’s supposed to teach them all how valuable Kristy is.  Or something.  And they do pull things together at the last minute so the festival’s fairly successful.

A closeup look at Stoneybrook

I got a hold of a copy of The Ultimate Guide to the Baby-Sitters Club, and it included a one page map of Stoneybrook, so I thought I would share.  It's really small, but you should be able to download and then zoom in on it.  The quality's not great, but that's from the original image, not my scanner, so it's the best I could do.
When I was a kid I had a Stoneybrook map that I got from one of the fan clubs.  This one is different...there are things on here that didn't exist at that point.  It's pretty similar though, in terms of general layout, at least from what I can remember. 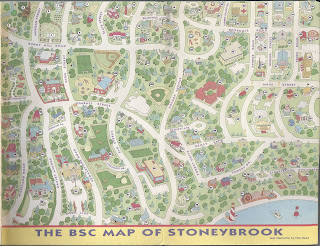 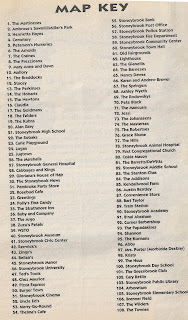