“Why was I always choosing between my parents?”…..BSC # 58: Stacey’s Choice


So, either Stacey was really annoying in this book, or I was a bratty pre-teen. Or maybe a little of both. Cause my memory of this one is how Stacey was super-over-dramatic and annoying. Her mom gets pneumonia and Stacey acts like if she leaves her mom alone to go to school, or to see her dad, her mom will be totally helpless. Not to sound insensitive, but her mother is an adult. She doesn't need you that much.

I also remember a major typo in the book where they mention Mary Anne’s mom showing up to take care of Mrs. McGill. It stuck in my head cause, you know, Mary Anne’s mom is dead. It is in chapter two of every book, so the ghostwriter has no excuse for that one.

I think I am going to go with Stacey is over-dramatic and annoying. Cause..yeah, she just is. Her mother passes out at a job interview and ends up in the hospital. They diagnose her with pneumonia (which is serious, but not a HUGE deal) and send her home. Stacey decides that since her mom always takes care of her when she is sick, she should do the same for her mom. Which is admirable, but remember how Stacey always says she wants her parents to leave her alone when she is sick? Maybe she should be a little understanding. Maybe I am biased because I like to be left alone when I’m sick, but it still seems a little over the top.

Stacey eventually decides she can’t miss weeks of school to stay with her mom, and she decides to line up “mom sitters.” She gets all the parents of BSC clients to come over to watch over her mom. Which, really? I think her mom can handle being alone for a couple hours. If an emergency happened she could call a neighbor. She is supposedly friends with Mal’s mom, who lives right near there. But, whatever.

Meanwhile, Stacey’s dad gets promoted to Vice President of his company, and they have a dinner in his honor. Her dad brings Stacey as his guest, but since Mrs. McGill is sick, Stacey is worried about going to NYC for so long. She finally decides to go for the night, but come back in the morning (instead of staying all weekend). Her dad gets a visiting nurse to show up, and Stacey lines up “mom sitters,” but Stacey still insists on calling home every five minutes and leaving the dinner (in honor of her dad) early so she can get up at 5 am for an early train.

When she gets home, they realize there were multiple people lined up to take care of Maureen (is that her mom’s name?) Then she and her dad argue, then reconcile, and Stacey angsts about being the child of divorced parents. Then her mom recovers and gets a job at a department store where she can get employee discounts. So everything is good.

Meanwhile, the BSCers who are not being melodramatic are dealing with a new sitting issue. The neighborhood kids decide to spend all their time ordering things from catalogues. Random stuff like “moon dust,” a “bust developer,” lotion for crows feet, a slicer and dicer, etc. After awhile the kids realize it is crap and since they have no money left, they write songs/skits/etc to try and sell it. No one buys anything, but most of the parents give them money for the show. So everyone is happy.

“I had no idea what a sitting job inew neighborhood would really mean”…..BSC # 11: Kristy and the Snobs

For some reason, what really sticks in my head from this one is the funeral they had for Kristy’s dog. And I remember how they made this huge deal out of Stacey using “reverse psychology” and even remind people of it in later books. Because whenever I hear the term, or see an example of it I think of the BSC.

This book starts out a few weeks after Kristy has moved into Watson’s “mansion.” She is predisposed to hate the kids in her neighborhood for being “snobs,” so, she is a little bitchy to them. Of course, they are a little bitchy back, then they call each other snobs and jerks. There is sort of two levels of this conflict – one is the Delaney’s, the snobby kids she has to sit for. The other is Shannon, who ends up joining the BSC.

Shannon is pissed that Kristy is taking her baby-sitting jobs. So, they play some practical jokes on each other and try to ruin the other’s sitting jobs. But, they sort of bond over the fact that Kristy’s dog Louie is sick and gets put to sleep. Shannon ends up giving one of her dog’s puppies to David Michael. He names her Shannon, cause everyone wants to have a dog named after them. After that, Kristy and Shannon become friendly and they ask her to join the club.

Meanwhile, the Delaneys, are acting like a couple of spoiled brats. She calls them snobs, complains about them, etc. Stacey is apparently a mini-psych major and pulls “reverse psychology” on them. That weird them out, and they eventually, they start to behave.

I never actually read this book as a kid. In fact, I only read a few of the Little Sister books. I read the BSC books after I was too old to, but the Little Sister books were at an even lower reading level, and I just didn’t bother with them. But, I got this in a package of BSC stuff on e-bay, so I figured I’d blog about it.

The basic plot is that is December and Karen is looking forward to Christmas and all the new toys she thinks she is going to get. Seriously, she is a little spoiled brat about it. Then, Nannie falls and injures her hip, and might be in the hospital for the holidays. Karen decides the only thing she will ask for will be for Nannie to get better. Which, shockingly, she does, and she comes home on Christmas Eve.

Meanwhile, Karen has been talking to her friend Nancy about Hanukah and the girls “trade holidays,” where Karen goes to Nancy’s house and celebrates Hanukah with her one night and Nancy does the same thing on X-mas. And they get each other the same Bobbsey Twin book as a gift because they are just that close. It was really predictable.

Like I said, I never read this book, but I must have read the surrounding ones. Karen talks about how “last month” at Thanksgiving she had two turkey dinners (which I do remember happening). I also remember some book where Karen is a little bitch telling people they aren’t keeping their New Years resolution, and tells Nannie she isn’t working hard enough in physical therapy. I am guessing that was right after this book. Although, I don’t remember any mention of Nannie getting hurt in the regular BSC books. That was really the only thing I liked about the Little Sister books, that their was sometime crossover stuff.


Don't you love how cliche it is? All the "I want world peace" stuff along with the fancy dolls?

Lastly, check out this picture. Whoever did this illustration should be fired: 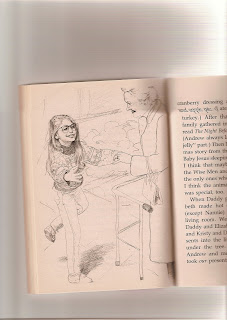 All I remember is Travis giving her gifts. And this scene where Dawn is surprised that Travis could drive at 16 – because even though it is the legal driving age, most parents make their kids wait until they are 17. Or, so Dawn claimed. I didn’t believe it at the time, but I grew up in NJ where you can’t get your license until 17. So, I have no idea what people in other states did.

At a sleepover at Kristy’s, Dawn meets this guy who is friends with Charlie and Sam. He is from California, so Dawn is instantly into him. For some reason, he decides to talk to her, even though he is at least three years older than her. Plus, afterwards, he visits Dawn, then gives her jewelry and hair clips to wear. Then he starts giving her “advice” like saying she should cut her hair or get another ear piercing, etc. Some of this she does. Cause, as we already know, Dawn will change anything for a guy.

Then she finds out that Travis is actually dating a HS girl and feels all betrayed. But she eventually does tell him off for leading her on. And, she kind of has a right to because he shouldn’t be giving gifts to some girl he has no interest in. Especially a thirteen-year-old. So, good for her. Then Mary Anne gives Dawn Lewis’s address, and they start to exchange letters.

Interestingly, the BSC doesn’t know about all this as it is happening. She finally tells them the whole story, but not until the end. What they are doing in the meantime, is dealing with a baby-sitting crisis: The Perkins and the Hobarts are putting on a play. James wrote it, which makes one of the assholes from THIS book make fun of him. Plus, the Perkins dog is in the play, which makes things difficult. I always pictured that dog as this huge monster-size one. I think they had a similar one in Sleepover Friends…One of the girls had a large dog, and the scenes always made me think it was a crazy-big animal. But, anyway, the play goes well enough, I guess. And James sort of makes friends with the asshole. Of course, I think he did this in an earlier book too, so who knows how long it will last.